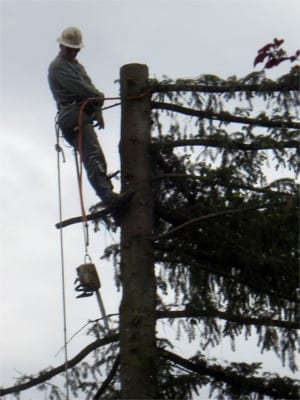 Topping is the indiscriminate cutting of tree branches to stubs or lateral branches that are not large enough to assume the terminal role. Other names for topping include “heading,” “tipping,” “hat-racking,” and “rounding over.”

The most common reason given for topping is to reduce the size of a tree. Home owners often feel that their trees have become too large for their property. People fear that tall trees may pose a hazard. Topping, however, is not a viable method of height reduction and certainly does not reduce the hazard. In fact, topping will make a tree more hazardous in the long term.

There are other methods of branch reduction that can help to preserve the natural form of the tree. However, if large cuts are involved, the tree may not be able to close over and compartmentalize the wounds. Sometimes the best solution is to remove the tree and replace it with a species that is more appropriate for the site.

Sometimes a tree must be reduced in height or spread. Providing clearance for utility lines is an example. There are recommended techniques for doing so. If practical, branches should be removed back to their point of origin. If a branch must be shortened, it should be cut back to a lateral that is large enough to assume the terminal role. A rule of thumb is to cut back to a lateral that is at least one-third the diameter of the limb being removed.

The cost of topping a tree is not necessary limited to your initial costs. If the tree survives, it may require pruning again within a few years. If the tree dies, it will have to be removed.

Topping is a high-maintenance pruning practice, with some hidden costs. One is the reduction in property value. Healthy, well-maintained trees can add to the value of a property. Disfigured, topped trees are considered an impending expense. For more information about tree trimming you can read more on this page.

Another possible cost of topped trees is potential liability. Topped trees are prone to breaking and can be hazardous. Because topping is considered an unacceptable pruning practice, any damage caused by branch failure of a topped tree may lead to a finding of negligence in a court of law.

The natural branching structure of a tree is a biological wonder. Trees form a variety of shapes and growth habits, all with the same goal of presenting their leaves to the sun. Topping removes the ends of the branches, often leaving ugly stubs. Topping destroys the natural form of a tree.

Without leaves (up to 6 months of the year in temperate climates), a topped tree appears disfigured and mutilated. With leaves, it is a dense ball of foliage, lacking its simple grace. A tree that has been topped can never fully regain its natural form.

Topping is perhaps the most harmful tree pruning practice known. Yet, despite more than 25 years of literature and seminars explaining its harmful effects, topping remains a common practice.

Stubs left from topping usually decay and become hazards
The survival mechanism that causes a tree to produce multiple shoots below each topping cut comes at great expense to the tree. These shoots develop from buds near the surface of the old branches. Unlike normal branches that develop in a socket of overlapping wood tissues, these new shoots are anchored only in the outermost layers of the parent branches.

The new shoots grow quickly, as much as 20 feet in one year, in some species. Unfortunately, the shoots are prone to breaking, especially during windy conditions. The irony is that while the goal was to reduce the tree’s height to make it safer, it has been made more hazardous than before.

Topping Can Lead to Sunburn

Leaving a stub is an open pathway to decay
Branches within a tree’s crown produce thousands of leaves to absorb sunlight. When the leaves are removed, the remaining branches and trunk are suddenly exposed to high levels of light and heat. The result may be sunburn of the tissues beneath the bark, which can lead to cankers, bark splitting, and death of some branches.

The preferred location to make a pruning cut is just beyond the branch collar at the branch’s point of attachment. The tree is biologically equipped to close such a wound, provided the tree is healthy enough and the wound is not too large. Cuts made along a limb between lateral branches create stubs with wounds that the tree may not be able to close. The exposed wood tissues begin to decay. Normally, a tree will “wall off,” or compartmentalize, the decaying tissues, but few trees can defend the multiple severe wounds caused by topping. The decay organisms are given a free path to move down through the branches.

Topping often removes 50 to 100 percent of the leaf-bearing crown of a tree. Because leaves are the food factories of a tree, removing them can temporarily starve a tree. The severity of the pruning triggers a sort of survival mechanism. The tree activates latent buds, forcing the rapid growth of multiple shoots below each cut. The tree needs to put out a new crop of leaves as soon as possible. If a tree does not have the stored energy reserves to do so, it will be seriously weakened and may die.

A stressed tree is more vulnerable to insect and disease infestations. Large, open pruning wounds expose the sapwood and heartwood to attacks. The tree may lack sufficient energy to chemically defend the wounds against invasion, and some insects are actually attracted to the chemical signals trees release. 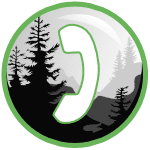